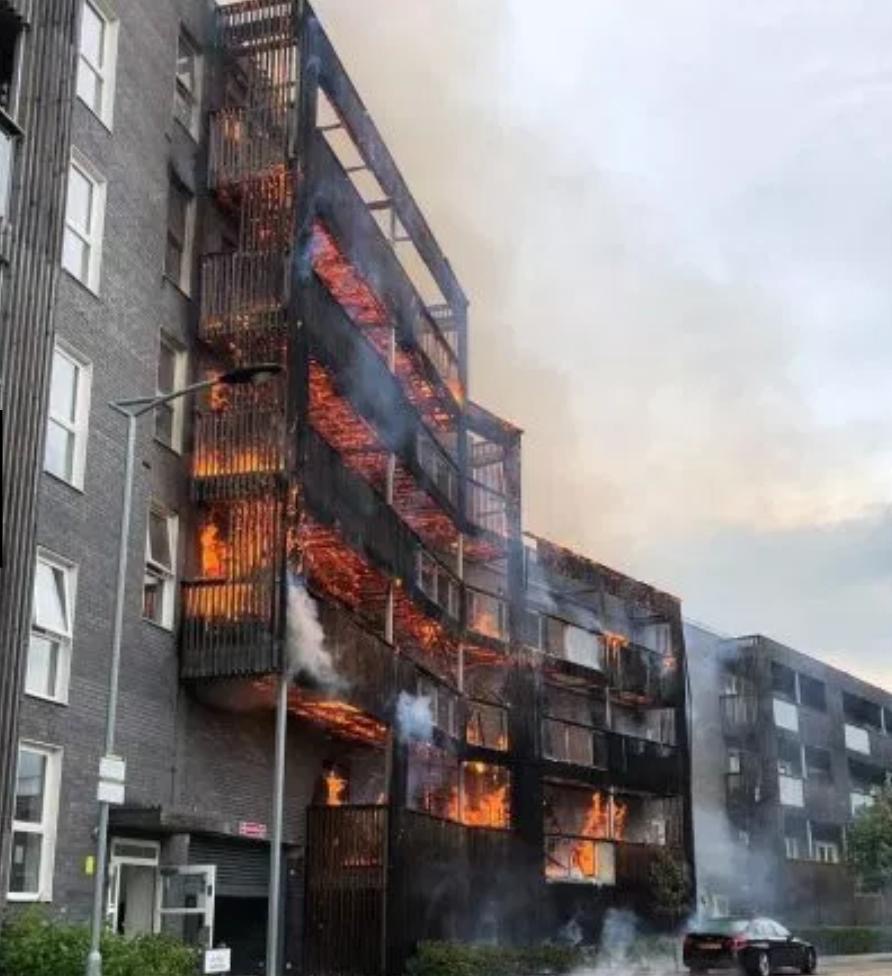 The Samuel Garside House fire spread rapidly up and across wooden balconies. In the immediate aftermath of the fire, a meeting of 200 angry residents called by the Barking Reach Residents Association, discussed,  amended and then unanimously agreed the following:

“That Bellway and the others involved in the construction and management of the estate were negligent because they failed to address their minds to the obvious risk from the wooden constructed balconies and cladding despite previous concerns raised by residents.”

By construction, we refer primarily to Bellway Homes, the builder, which has agreed to pay for the design and replacement of the wooden balconies and is involved in consultations about the replacement of the wooden fronts to the nearby houses, but also to Mace group, the international consultancy and construction company, which built many wood-fronted houses on the estate.

By housing management, we refer to the board of Barking Riverside Limited, consisting of London and Quadrant (L&Q) and the Greater London Assembly (GLA) who jointly own the estate. We also find responsibility in the leadership of the Barking and Dagenham Council, who have a duty of care to residents and grant planning permission.

Then there is the landlord of the block of flats, Adriatic Land, to whom the block and adjoining land was sold after development by Bellway Homes. It is still the case that this landlord will not engage with the residents association.

The specific failing that led to the fire is set out here in great detail.

But beneath much of the negligence in the discharge of housing management duties, in our view, lies the invisible, dead hand of Adriatic Land, and the management agents such as Homeground, Pinnacle Places and Residential Management Group which answered principally to them during the years since construction, resulting in a reckless endangerment of residents’ lives.

After the Grenfell Tower fire, in which 72 people died, it should have become self-evident that urgent action was needed to remove the wooden cladding. The fire could and should have been avoided, if longstanding resident concerns and systemic failings, detailed here, had been addressed by those with ultimate responsibility.

There had been a long struggle of residents to get the management of the estate to be more responsive to their concerns.

We set out, in this report, only part of that struggle, relating to the fire, but we urge here that this was part of a wider context of a systemic failure of responsibility. When our readers ask, ‘How is it possible that they did not act?’ as each section of this report unfolds, they need only consider that none of the above parties admit responsibly even now.

The establishment of the estate

From the start the plan was to set up a privately owned estate, rather than an estate of council and private housing on council land.

The residents association argued that this was a mistake,  as it removed from residents the nominal democratic voice they had through electing representatives to the council from the estate, albeit that this voice was in theory returned to them via the Barking Riverside Community Interest Company once the entire estate was completed, occupied and financially independent, in the decades ahead. But this promise did not help when residents clashed with the landlords at the present time, and it appeared to be in the process of being revoked.

The GLA still retains a minority 49% share ownership of Barking Riverside Limited. The council’s 51% share passed first to Bellway Homes,  the builders, and then to London and Quadrant Housing Association, (L&Q) circa 2015.

Initially the Barking Riverside Community Interest Company (the CIC) was set up,  which has in its articles of incorporation, publicly available on the Companies House website, a formulation giving residents a seat on the board of directors,  until completion of the estate and its financial independence, whereupon the residents gain a majority on the board.

Bellway built many of the homes and Mace built a section of homes. The Mace section,  north of Galleons Drive and facing Samuel Garside House on the south side, is still, to the best of our knowledge, owned by Barking Riverside Limited.

The ownership of the south side of Galleons Drive passed to Adriatic Land 4 (GR1) Ltd. Management of both the blocks of flats and the wider estate was initially in the hands of Pinnacle Places, but under pressure from residents,  Adriatic,  represented by Homeground, removed them and installed Residential Management Group (RMG), who took over in October 2018.

Thus, residents of Samuel Garside House were managed by RMG, representing the landlord Adriatic, itself represented by Homeground, on an estate developed by Barking Riverside Limited,  and managed by Pinnacle places.

It is not difficult to believe that this weave of responsibilities is not healthy, and not conducive to responsible management.

We have noticed that other housing developments where Bellway is the builder have found themselves sold off to Adriatic, and many residents have suggested links between the two.

Of Adriatic Land we read the following in Hansard, the record of government proceedings:

“Who are Adriatic Land 5? We found it very difficult to find information about them, but we have had some help. We now understand that Adriatic Land is a residential freeholding company of various formulations, managed by the Long Harbour Ground Rent Fund.

“All Adriatic Land companies hide their ultimate beneficial ownership behind the directors of the Sanne Group, which has its headquarters in Guernsey. Long Harbour is a £1.4 billion fund and claims to have revenues of only £4 million on the ground rent fund, with a total of £340,000 in profits.

“Its sister company, Home Ground, told the Select Committee on Housing, Communities and Local Government in November 2018 that it collects £32 million per year in ground rent. Long Harbour claims to be investing in residential freehold primarily for pension funds, but there is no evidence of this, and there is a belief in the wider industry that predominantly hedge funds and speculators are behind it.”

Equally,  as stated,  it is believed to have been spun off from Bellway Homes insofar as various individuals seem to have been associated with both entities. But further investigation into this issue is beyond our remit. Our only point here is that we are not alone in viewing Adriatic Land as being an entity without any justification for its existence. It is registered in Guernsey, in the channel islands, which are ‘among worst tax havens’ worldwide according to a BBC report. https://www.bbc.com/news/world-europe-jersey-48354081