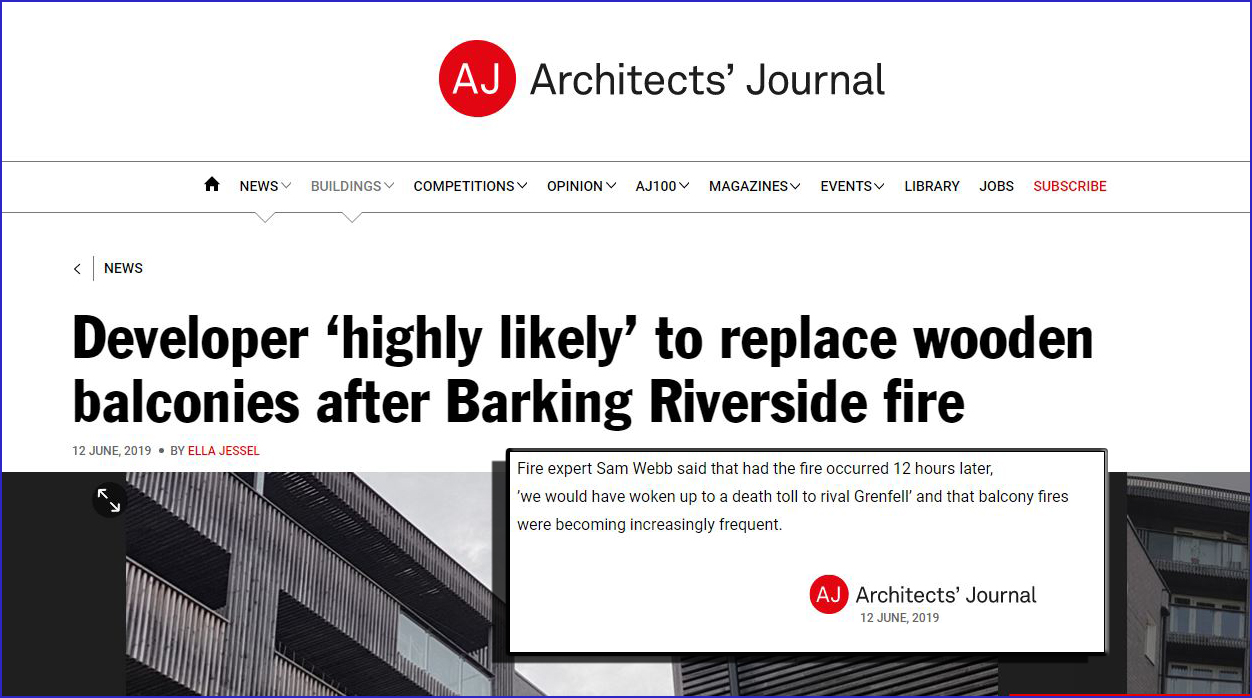 In the previous section, we quote from resident M, who contacted RMG on the very day of the fire with concerns about a barbecue on the west facing side of Samuel Garside House, where the balcony wood was continuous across the entire block, and not broken up by concrete stairwells, as it is on the east facing side where the fire took place.

We mention this incident because it shows two things. Firstly that sooner or later, given the wooden structures, a fire was inevitable, whether through stupidity or an accident – a firework, a kitchen fire.

This is confirmed by the London Fire Brigade report, which concludes that the fire could have been started by “any small ignition source.”

”Fires happen – a fire took place in the 20 floor council tower block I lived in for a decade in Tower Hamlets. I lived on the 15th floor and the fire was quite a few floors down, but directly beneath us. But there was no cladding on this block. And at that time, cuts to maintenance had not so completely destroyed the internal fire proof  integrity of the building. The fire beneath us destroyed the flat but it took only one fire engine to put out and there was no Grenfell disaster.’

The situation on the 9 June 2019 was very different. If our ever vigilant residents had not managed to convince their downstairs residents to put out that barbeque and the fire had started on the west facing side of Samuel Garside House, where there are no stairwell breaks, as stated above,  the entire building would have been consumed by fire.

Scenario one: if the fire had started on the west-facing side

It cannot be ruled out in these circumstances that the estate around Samuel Garside house could have burned down. The flames could have leapt across the narrow road to the other side of DePass Gardens, where the west facing walls, facing Samuel Garside House,  are clad with wood. From there they could have rapidly spread down both Chilworth Place and Galleons Drive. The resulting conflagration could have jumped over to the north side of Galleons Drive,  with similar jumps to Lawes way and the other streets, Middleton Grove, McAllister Grove, Gatward Place and Crossness Road, spreading rapidly from house to house. Some 233 houses have wood fronts, all vulnerable to such a scenario.

Scenario two: if the temporary boiler was situated at Samuel Garside rather than its twin

The other good fortune that saved the estate from an outright estate-wide conflagration, was that there was no temporary boiler stationed directly outside Samuel Garside House, a few feet from the wooden balconies, whereas, at that time, there was a temporary boiler in this position, precisely where the fire took place, in the twin block, Ernest Websdale House. This boiler has since been moved away from the wooden balconies. Had the reverse been the case, as a resident pointed out at the time,  the boiler could have exploded and the fire spread as indicated to the surrounding streets.

That’s a one-in-four chance happening. And furthermore, as the experts stated at the time, lives – “to rival Grenfell” – were only not lost because the fire happened during the day.

There are 79 dwellings in Samuel Garside House and 47 in Ernest Websdale House, but they otherwise share the same architectural appearance, and wood decorated balconies.

← On the day of the fire